Generally, the GC/MS has been used for the analysis of phthalate esters, however ,the measurement time by GC/MS is relatively long and, it requires sample preparation such as isolation and extraction (waste of time and cost).  On the other hand, the FTIR enables the completion of analysis in just one minute if the sample contains more than a few percentage of phthalate esters.  Particularly, the ATR method enables the non-destructive measurement of surface of sample by just contacting the prism to the sample, without consideration of sample thickness or color.  In soft PVC plastic, since usually 10 to 60% of phthalate ester plasticizer is added, the FTIR could be the best suitable method for the 1st screening inspection.

In this application, the identification and quantitative determination of phthalate ester plasticizer in A1 size PVC sheet has been carried out by using of a single bounce ATR for large-sized sample (Figure 2). 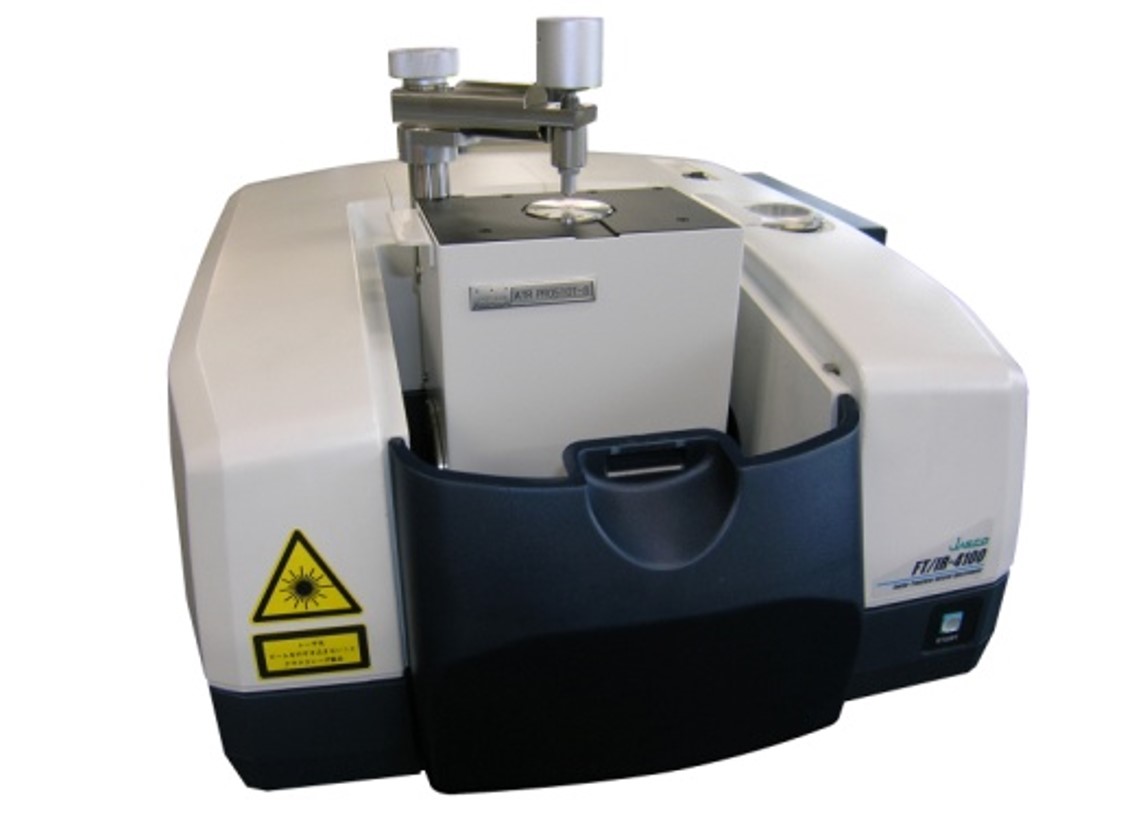 The ATR method offering easy sampling can be applied to the non-destructive measurement. Recently, the request to measure the large-sized product or molded product as it is has been increased day by day.  The newly designed Model ATR PRO510T-S/PRO530T-H) is now available and allows the users to let the sample position higher than main unit FTIR (See Fig. 2 and 3), allowing the measurement of the very large sample that cannot be accommodated in the standard sample compartment of FTIR main unit.  Also, the center of sample can be measured if the sample size is up to 6 inches, and as you can see in the photo (Fig. 3.), even the A1 size sheet can be measured as it is. Such capability suggests the possibility for applying this method to the final inspection of all finished products from production line such as of sheet film or of vehicle bumper molded.  Similarly to the model of ordinary ATR, the higher contact pressure model (ATR PRO530T-H) is available so that the sample having lumpy or hard surface can be applied to.

The A1 size PVC sheet (65 x 90 cm; no sample preparation done) was just put onto the sample stage of ATR (Figure 3). The measurement results were shown in Figure 4. 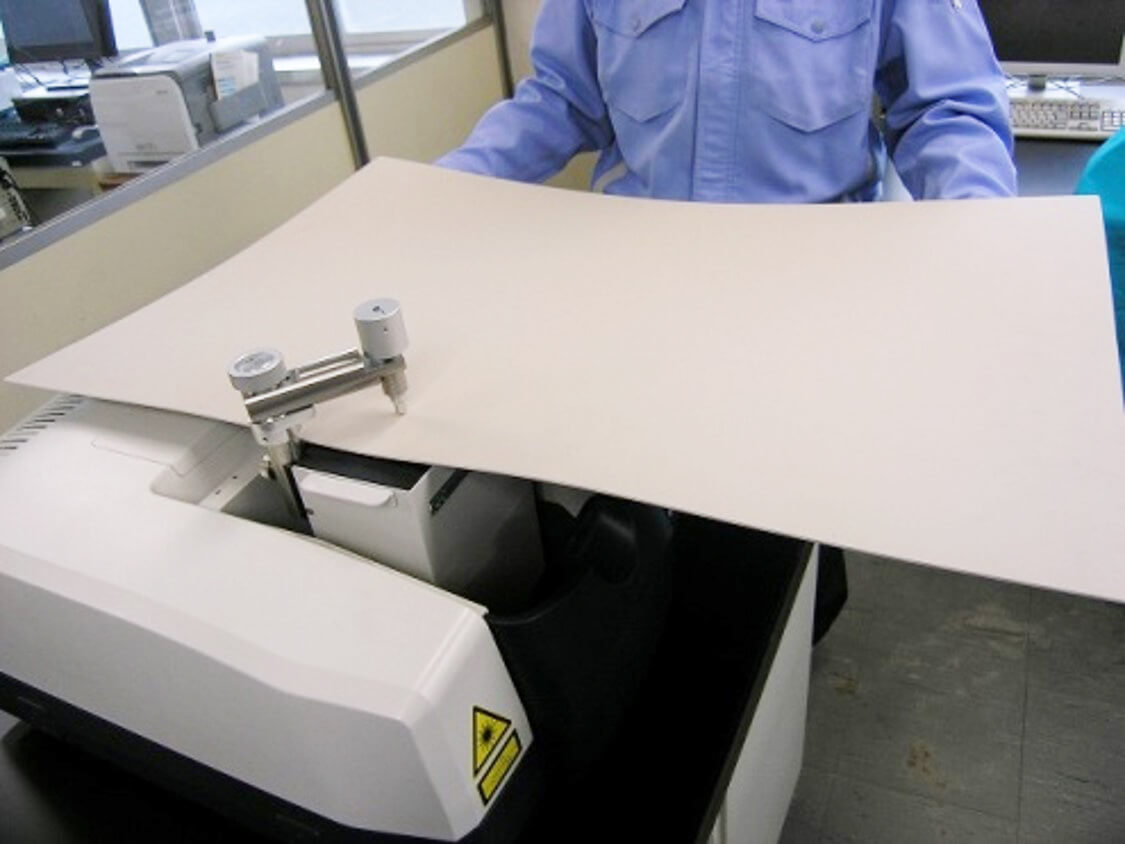 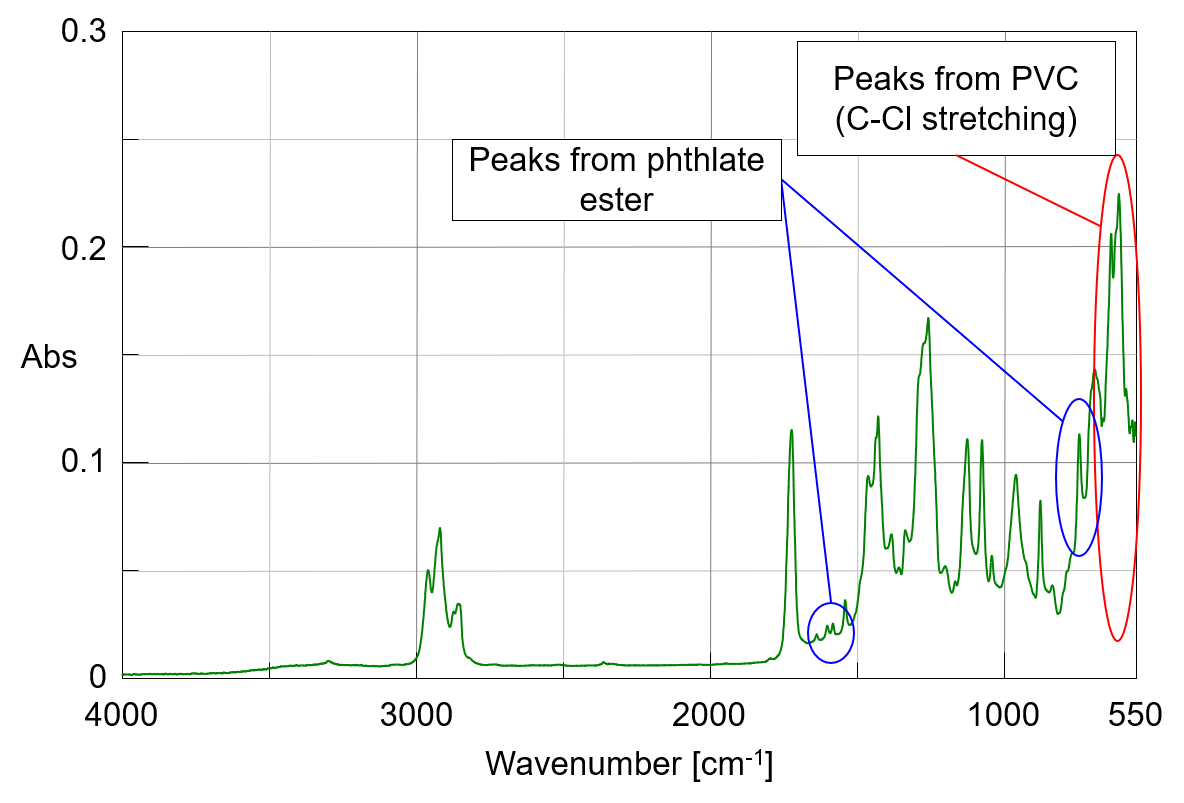 Such peaks of PVC can be observed clearly in IR spectrum (Figure 4.).  Regarding the peaks of phthalate esters (Figure 1.), the peaks will appear around 1720, 1280, and 1120 cm-1 as absorption by aromatic esters and, will appear around 1600, 1580, 1465, 1080, and 745 cm-1 as the absorption by aromatic ring in which the ortho position was substituted.  In the sample spectrum (Figure 4.), such peaks of phthalate esters plasticizer can also be observed.

In addition, the quantitative determination of DEHP was tried.  Each of 10, 20 and 40% DEHP contained PVC was measured by the same ATR method and then, the calibration curve was generated by the peak height of unique peak at 1600 cm-1 (Figure 5.). As a result of quantitative determination, it was confirmed that 37 % of DEHP was contained in A1 PVC. 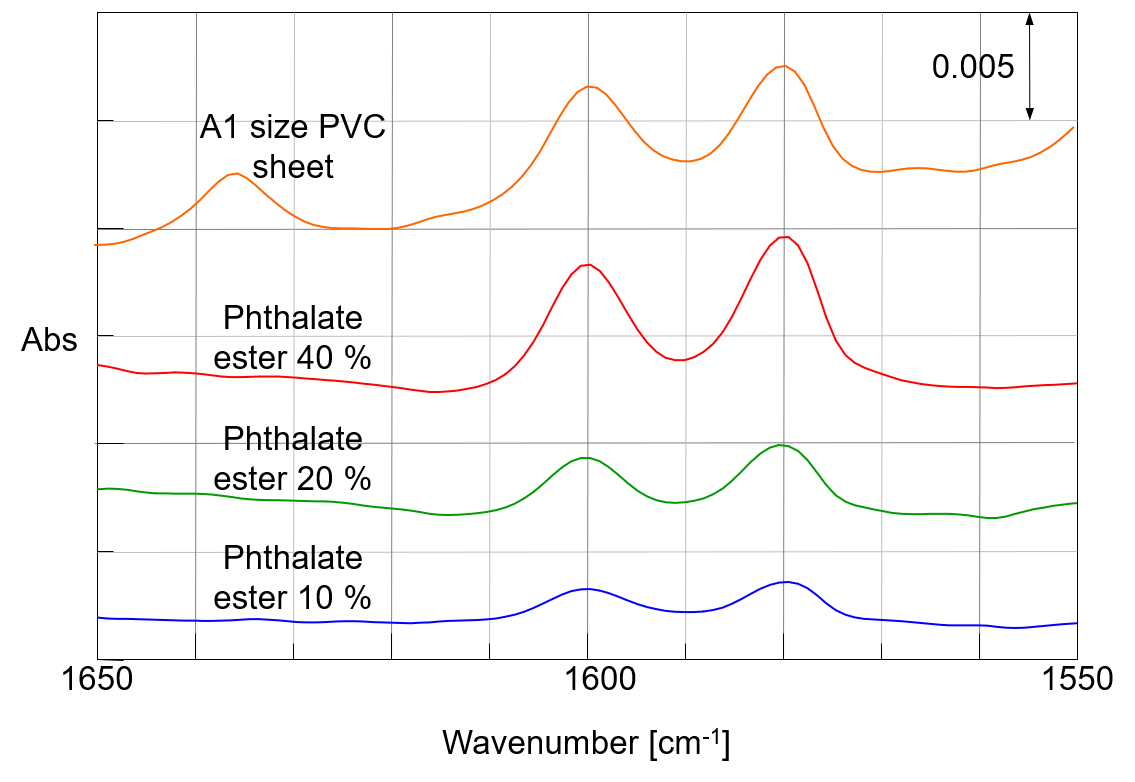 The above results clearly indicate that the ATR can be applied to the quantitative determination as well as to 1st screening inspection of phthalate ester plasticizer contents under the industrial regulations.  It is also suggested that our newly designed single bounace ATR for large-sized sample can be applied to the non-destructive and quick measurement of surface of extra large sample or molded sample.