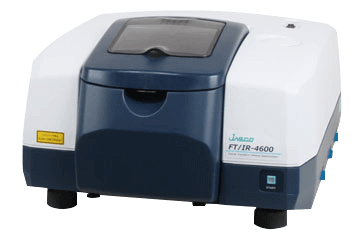 Commercially available instant adhesive was used as the sample. One of the main components, cyanoacrylate, reacts with water in the air resulting in polymerization; during this process it becomes hardened (Figure 1). IR spectra were measured by preparing a thin-film on a KBr window. IR spectra were measured using an FT/IR-4600 during a time course of 60 seconds at intervals of 2 seconds. Raman spectra were obtained using an NRS-5500 spectrometer. A drop of instant adhesive was thinly spread onto a glass slide, and was measured with a x20 objective lens during a 60 second time course at intervals of 2 seconds (with an excitation wavelength: 532 nm).

The IR and Raman spectra obtained from the time course measurement are shown in Figure 2 and Figure 3 respectively.

By comparing Figure 2 with Figure 3, it can be observed that the intensity of the Raman peak attributed to the C=C double bond at 1620 cm-1 decreases during the polymerization progress, while no clear change in the IR spectra can be seen with time because the peak intensity is too weak. Conversely, the peaks in the fingerprint region in the IR spectra change with time, while there is no distinguishable change in the peaks in the Raman spectra in the same region. The results of simultaneous correlation of the IR and Raman spectral changes with time are shown in Figs. 4 and 5 respectively.

In order to analyze the data in integrated manner, simultaneous correlation analysis was carried out by combining the IR spectra with Raman spectra (Figure 6). At the intersection point of the C=C peak in Raman with the C=O peak in the IR, the C=O peak at the low-wavenumber side in blue (minus) and the peak at the high-wavenumber side in red (plus) are correlated. It is considered that the C=O peak is shifted to the high-wavenumber side with time as the C=C peak is monotonically decreased with time as shown in Figure 7. In addition, the C=C peak in Raman and the IR peaks in the region from 1400 cm-1 to 1100 cm-1 also show correlation. As with the C=C in Raman against the C=O in the IR, a similar correlation is observed for the CN group, and accordingly, it is found that the peak intensity of CN group is deceased without peak shift. 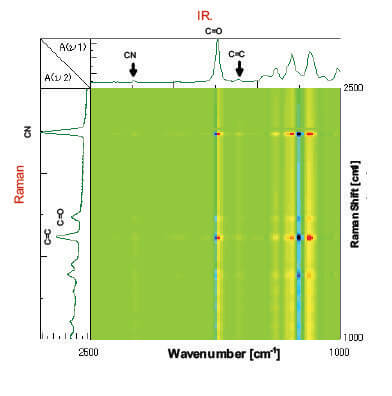 As explained above, in accordance with the transformation of structure from C=C to C-C during the polymerization reaction, it is presumed that the conformation of the  functional groups not related to the polymerization such as C=O and CN are also changed. In this example the results obtained by IR and Raman were used for analysis. However, a combination of results obtained from other spectroscopic techniques (NIR, UV, Visible, CD etc.) in addition to the results by Raman and IR would expand the possibilities for a variety of analysis, such as the attribution of peaks, lattice vibration and the relationship with color, chiral information and intramolecular vibration. 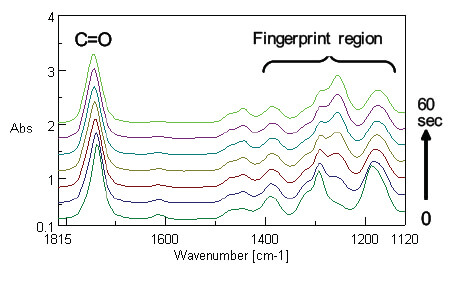 Mr. Akao, is the Applications Group Manager at JASCO Corporation, with many years at the company working on applications in electronic and vibrational spectroscopy, and is an expert in IR and Raman spectroscopy.