Infrared spectrophotometers were developed in the US in the mid 1940s. Initially, their applications were confined to R&D work on organic compounds, mainly in the petrochemical field.  The first Japanese instruments were manufactured in 1954 by the Applied Optics Research Institute, the predecessor of JASCO.  In dispersive infrared spectrophotometers,  light transmitted through a sample is dispersed by a diffraction grating and the intensity at each wavelength is sequentially detected using a thermocouple. A double-beam configuration is employed to perform background correction in real time as shown in Fig. 3. 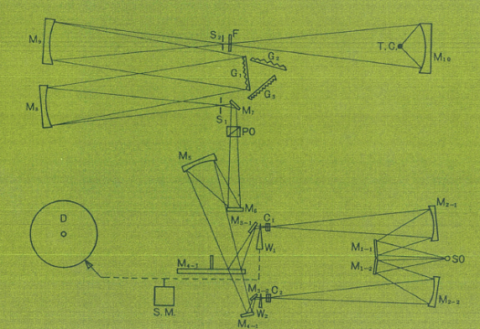 In the 1980s, the Fourier transform infrared (FTIR) spectrophotometer was invented. This uses an interferometer instead of a dispersive monochromater, and allows all wavelengths to be detected simultaneously. The resulting interference waveform, called an  “interferogram”, is subjected to a Fourier transform to calculate the intensity at each wavelength. Fig. 4 shows a comparison between the optical setups used in dispersion and interferometer based spectrophotometers. 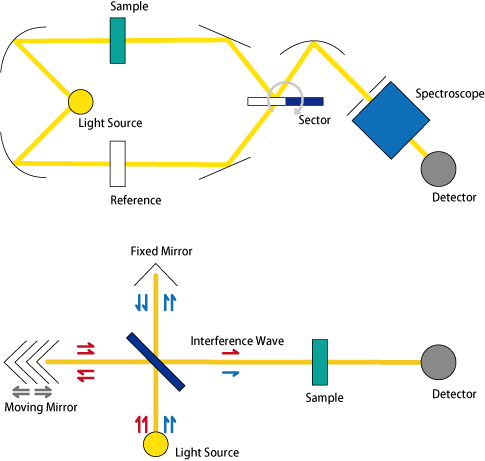 What is a Fourier transform?

A Fourier transform is a method for separating overlapping waveforms with different frequencies. It has a very wide range of applications.   One of the most familiar is the type of spectrum analyzer shown in Fig. 5. The horizontal axis of the digital audio data is frequency, the vertical axis represents sound pressure, and changes in the audio signal are visualized as time passes.