The development of advanced materials, particularly liquid crystals and macromolecules, requires the ability to control and analyze the molecular orientation of these compounds. Molecular orientation is generally analyzed by a method based on birefringence, an X-ray diffraction method that provides information on the solid crystallinity, or infrared spectroscopy, which yields information on molecular vibrational activity. With infrared spectroscopy, orientation is evaluated by measuring the polarization characteristics of the sample with a polarizer placed in the optical path. A polarized ATR accessory has been developed that allows measurements of sample polarization based on the ATR effect and allows analysis of the molecular orientation on sample surfaces in the 1-2 µm range. This technique permits the analysis of molecular orientation on sample surfaces regardless of sample thickness or material. 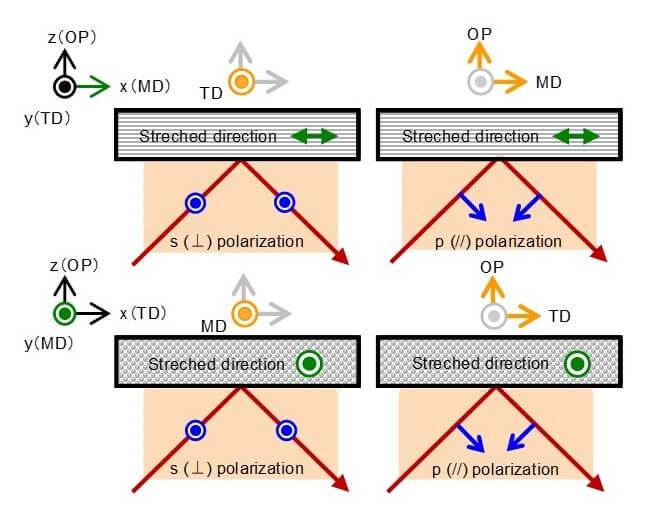 Figure 2: Relationship of the direction of polarizer and stretched axis of the oriented films

A method for analyzing the molecular orientation of oriented films along a stretched axis within the plane (MD); along a transverse axis within the plane (TD); or along an axis of depth (OP) is described below. When a stretched film is aligned with the axis along which the light beam travels and the film is irradiated by a light beam polarized perpendicular to the sample (s-polarized), information can be obtained on the orientation along the y-axis (perpendicular direction), as shown in the upper left of Figure 2. When a sample is irradiated by horizontally polarized (p-polarized) light, information for the x-axis (stretched direction) and z-axis orientations (axis of depth) can be analyzed, as shown in the upper right of Figure 2. By rotating the sample 90º and irradiating it with a perpendicularly polarized (s-polarized) light beam, information can be obtained for the orientation along the stretched direction, because the sample is positioned as shown in the lower left of Figure 2. Irradiating a sample in this position with a horizontally polarized (p-polarized) light beam yields information for orientation along the transverse axis and axis of depth, as shown in the lower right of Figure 2. This is summarized in Table 1. By calculating the peak intensity for each spectrum obtained, information can be obtained on all molecular orientations, MD, TD, and OP. Changing the direction of the sample and the angle of the polarizer allows three-dimensional analysis of sample orientations.

Features of the polarized single-reflection ATR accessory (ATR PRO610P-S, ATR PRO630P-H)
Polarized ATR (Figure 1) provides high polarization purity because the polarizer and analyzer are configured immediately in front of and behind the ATR prism. Removing the polarizer and analyzer makes it possible to use this accessory for standard ATR measurements. The ATR PRO630P-H provides a high-pressure contact option for measurements of samples that require greater crystal contact.

Measurement of oriented polypropylene (PP) films
An oriented PP film was measured using four different sample orientations (Figure 2) and the orientation of the surface was evaluated. The result is shown in Figure 3.

Figure 3: Spectra of a PP film measured by polarized ATR

The spectral differences in the region of 1500 to 700 cm-1 indicate that this PP film is composed primarily of isotactic PP and that the sample is oriented. If the sample is rotated 90º, the difference is greater for spolarization, which does not include information along the axis of depth. To evaluate the state of orientation along the vertical and stretched directions, a sample was irradiated with s-polarized light after rotating the sample and setting the stretched direction to the x direction, and then to the y direction. The degree of orientation was calculated using the peak heights at 809, 841, and 998 cm-1 in the measured spectra (Figure 4). These calculations yielded a figure of 0.95, which closely agrees with measurements obtained by the transmission method. These results suggest that the state of orientation of the measured PP film sample is similar throughout the film and at the surface to a depth of approximately 1 µm to 2 µm. 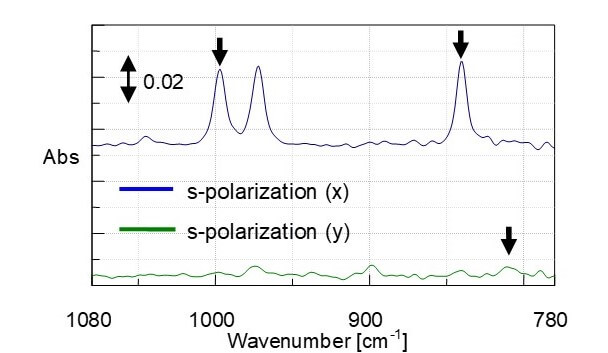 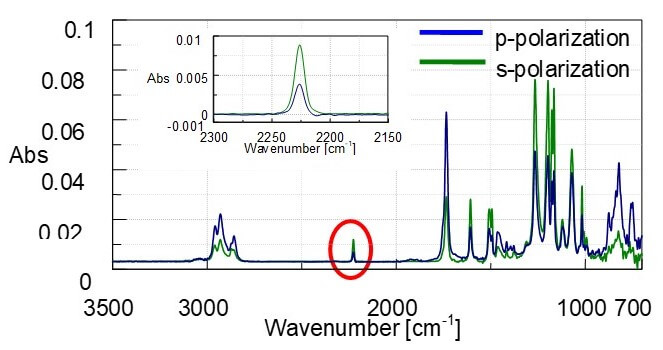 Figure 5 Spectra of a TN crystal measured by polarized ATR

A close look at the absorption peak near 2230 cm-1, a peak assigned to the nitrile group at the end of the liquid crystal molecule, shows that the peak is larger when measured with s-polarized light than with p-polarized light. For quantitative processing of the results, the ratio of the absorption of the peak near 2230 cm-1 along the z axis (depth) to absorption in the xy plane was calculated. Due to sample fluidity, the xy plane was assumed to have no orientation. Calculations give a ratio of approximately 0.002 (z direction/xy direction), indicating that the nitrile group is oriented within the xy plane parallel to the prism. This result is consistent with the knowledge that the chains are oriented (inclined) within a plane in TN liquid crystals in the absence of an electric field. Analyzing other absorption peaks that show differences make it possible to achieve a more detailed understanding of the oriented state of such molecules. As described above, polarized ATR spectroscopy is useful for rapidly and non-destructively measuring and evaluating the surface state of oriented molecules, such as film and liquid crystal compounds. The analysis results can also be used to calculate the degree of orientation for each vibrational mode and for quantitative evaluations of orientation along the axis of the molecular depth.

*Figures in parentheses show the direction of film stretching.