The measurement method that connects pretreatment and separation analysis online can be expected to improve the efficiency and precision of analysis including sample pretreatment. However, in order to investigate and optimize the measurement conditions, it is necessary to select and switch the appropriate extraction solvent and the mobile phase for pretreatment and separation analysis according to the characteristics of analytes in a sample.

We have developed online extraction-chromatography system (EX-Chromato System) which can be combined SFE or SE (solvent extraction under controlled pressure and temperature) with HPLC or SFC in one system (Fig.1 and 2). We reported an application about the analysis of additives in polymer samples using this system in SFC 2018. In this system, the extracts from extraction section can be trapped in a sampling loop or a column, and then injected into chromatography section by switching a high pressure valve installed between these sections (Fig. 3). This system is equipped with pumps that enable to deliver liquefied carbon dioxide, organic solvents, and water.

In this presentation, we applied the EX-Chromato System to analysis of several substances in citrus samples. We examined some combinations of extraction method and chromatography and investigated the influence on extraction efficiency and selectivity of analytes depending on extraction solvents and conditions. 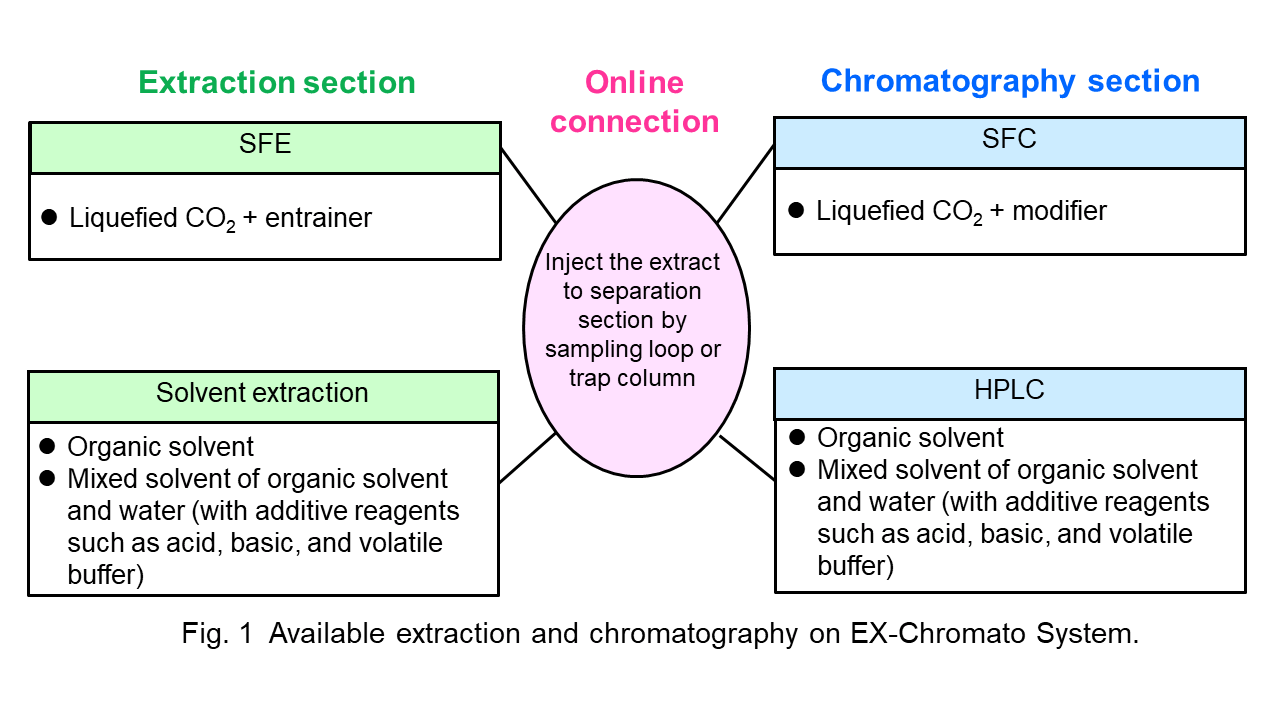 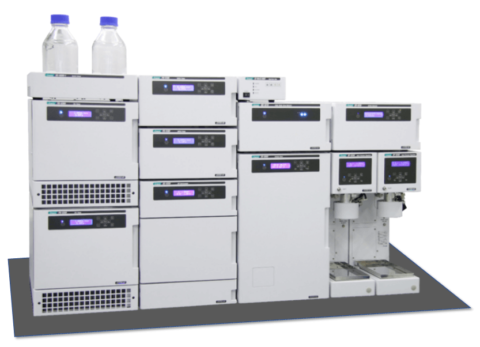 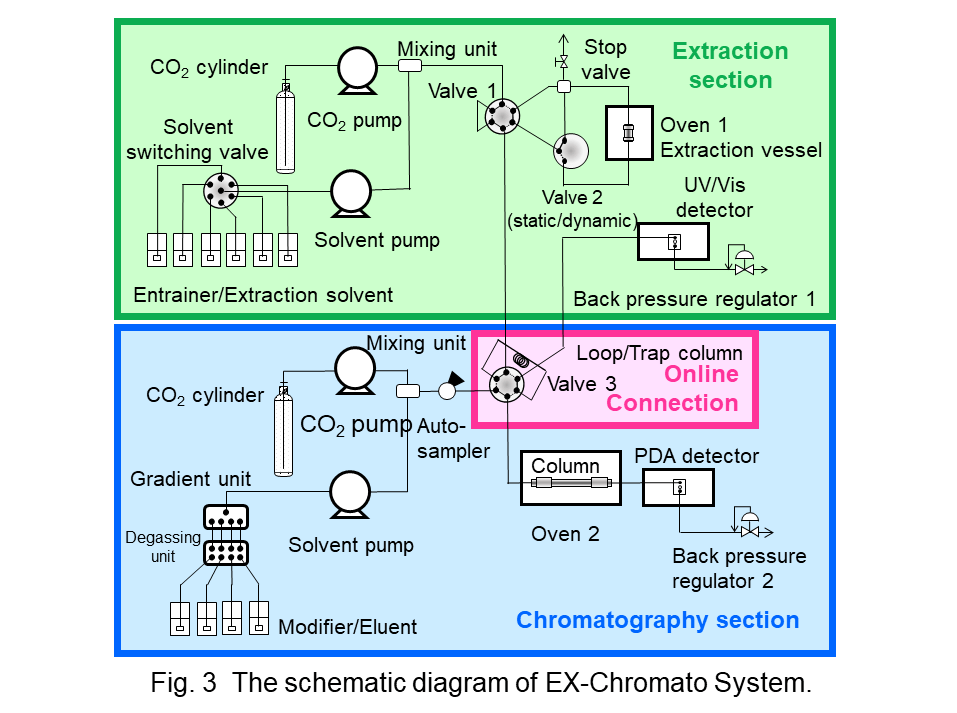 We used dried satsuma orange peel and chenpi (citrus reticulate peel) as extraction samples (Fig. 4). The ground samples (20 mg or 100 mg) were loaded into each 1.5 mL extraction vessel (EV-01) and connected to the system. At the time of loading, glass wools were sandwiched between the top and bottom of the sample (Fig. 5). These samples were statically and dynamically extracted using methanol, acetonitrile, and supercritical carbon dioxide as extraction solvents. Each extract was trapped in a sample loop and injected to HPLC or SFC online.

We used 5 components as standard samples (Fig. 6). Filter paper added mixture of standard solution was loaded into a extraction vessel, and extraction and separation were performed same as actual samples. We confirmed that the behavior change of the components extracted from citrus samples by the difference of the extraction method. 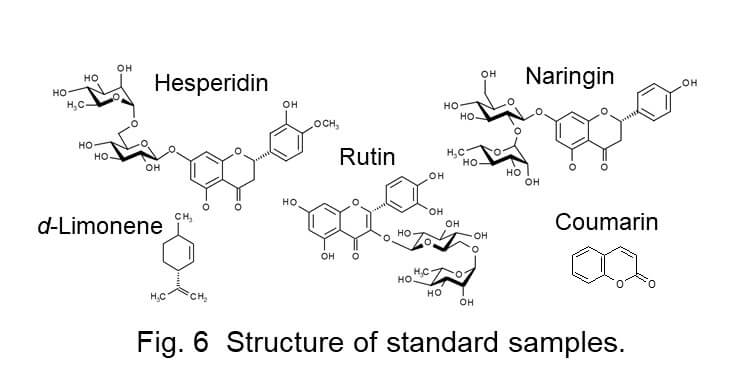 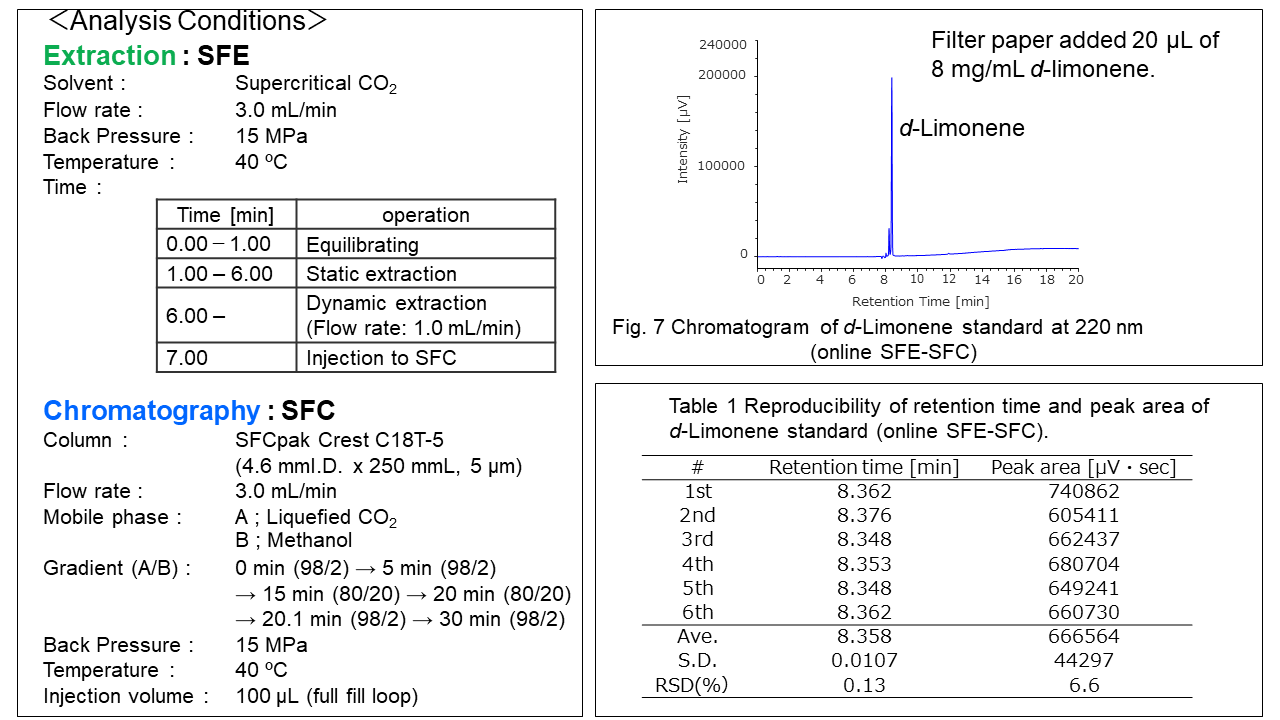 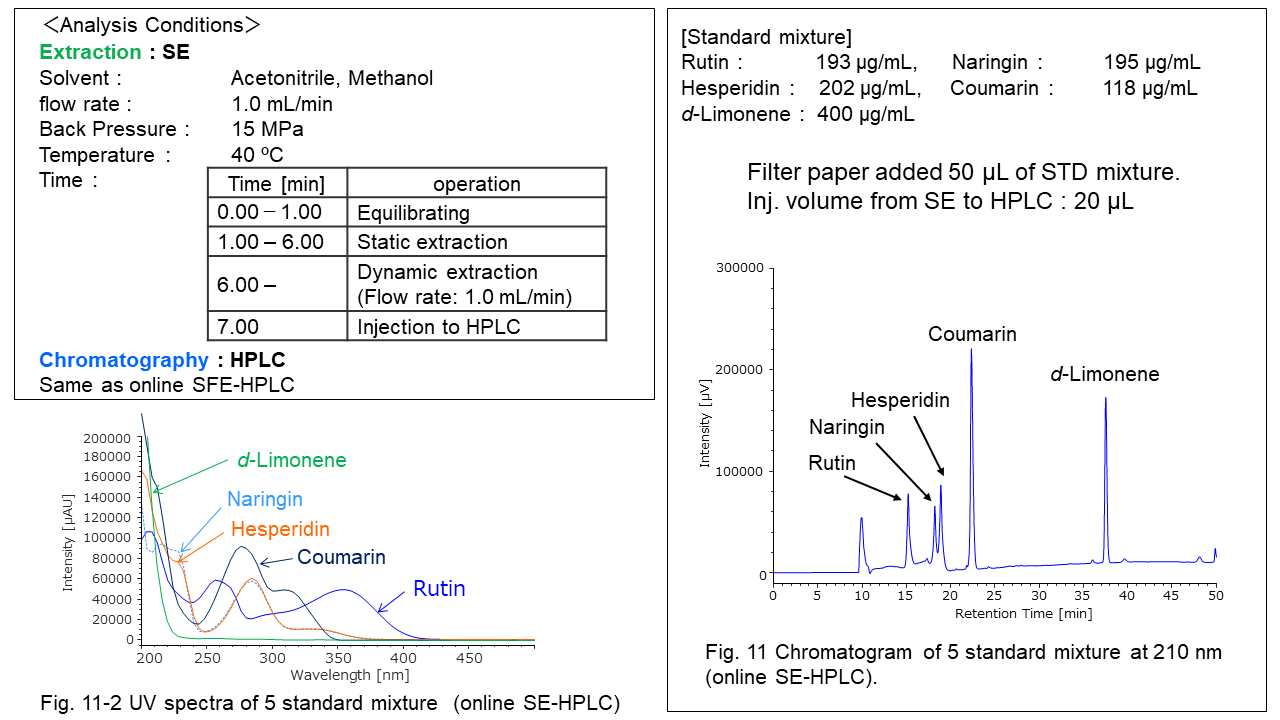 – Good reproducibility of d-limonene standard was obtained by online SFE-SFC (Table 1). However, it co-eluted with many contaminating components in citrus samples (Fig. 8 and Fig. 9). These separation was not improved by using a silica gel column.

– On the other hand, d-limonene retention was stronger by an ODS column in online SFE-HPLC, and it was possible to separate it from other contaminating components in citrus samples (Fig. 10).

– In online SE-HPLC, standard samples of rutin, naringin, and hesperidin were successfully separated using an ODS column (Fig. 11). However, in the actual sample, regardless of the type of extraction solvent (methanol or acetonitrile), it was not possible to obtain good separation due to contaminating components (Fig. 12).

– Low polarity components including limonene were selectively extracted by using supercritical carbon dioxide as an extraction solvent (Fig. 10). On the other hand, the extracted amount of  polar components eluting earlier than 25 min in HPLC were increased with acetonitrile and methanol (Fig. 12)

– Unknown peak 1 to 3 eluted in Fig. 12 were identified as nobiletin (peak 1) and tangeretin (peak 3) by the comparison with the spectra of standard samples measured separately (Fig 13).